KingSpry is proud to announce that one of the firm’s founding partners was honored at the 2014 Pennsylvania School Board Association (PSBA) School Leadership Conference in Hershey this past week. 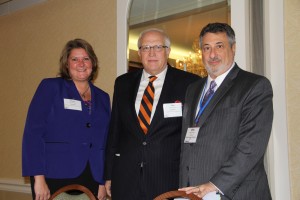 John E. Freund received the “Pennsylvania School Board Solicitors’ Association (PSBSA) 2014 President’s Award for Distinguished Career Achievement to School Law.” This annual honor recognizes and thanks school law practitioners who have contributed to school law through achievement at the highest level of accomplishment.

Firm colleague Kristine Roddick had the honor of welcoming her mentor to the podium. “John is a big picture kind of guy,” she explained. “When a few of us saw the movie ‘Lincoln,’ we bought the book. John went out and bought the car.”

In his remarks, Mr. Freund noted that, after attending some 4000 documented board meetings over thirty five years, perseverance and good humor are the best tools for working successfully with school boards. He shared some of his favorite quips that “explain the unexplainable,” including a firm favorite – “you can’t make this stuff up!”

“Good legal counsel makes an important contribution to public education, and to the tradition of local control,” Freund told the annual meeting of school lawyers and administrators.

As a founding member of KingSpry and chair of the firm’s Education Law Practice Group, Mr. Freund has substantial experience dealing with public entities, particularly education and matters affecting children. Over his career, he has represented public schools, private schools and colleges on a wide range of legal concerns, in virtually every court, agency and forum. He is approved counsel for numerous insurance carriers writing public entity and education-related coverages, and is approved counsel for the Pennsylvania Association of Elementary and Secondary School Principals.

Mr. Freund is a member of the Board of Directors of Lehigh Mutual Insurance Company and serves as the company’s corporate Secretary and General Counsel. He is a long-standing member of the Pennsylvania Association of Mutual Insurance Companies. Mr. Freund is a frequent lecturer and writer on education, public entity, employment and insurance law topics, and he serves as an instructor at East Stroudsburg University. He has been named a Pennsylvania Super Lawyer by Philadelphia Magazine consistently since 2007.