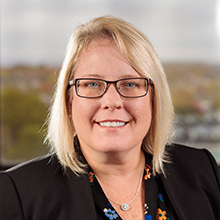 KingSpry is pleased to welcome attorney Jody A. Mooney back to the law firm, where she will focus her practice in the areas of labor and employment law.

For the past two years, Attorney Mooney served as Assistant Corporation Counsel IV to the City of Syracuse, New York, where she was part of the negotiation team on several labor contracts.

She received her B.A. in Psychology from Allentown College of St. Francis De Sales, and earned her Juris Doctorate from Temple University – James E. Beasley School of Law.